If you could pick the perfect proving ground for testing the merits of a new construction-site technology, there are perhaps no better projects than the Terminal B facility at New York City’s LaGuardia Airport and the Moynihan Train Hall at the James A. Farley Post Office building.

Skanska USA is handling the design and construction of both developments, which are part of New York Gov. Andrew Cuomo’s $100 billion initiative to modernize the state’s infrastructure and revitalize regional transportation.

The new $4 billion terminal at LaGuardia, which is expected to open next year, is the first step of an $8 billion overhaul of the entire airport in Queens. It will replace the existing Terminal B, which serves nearly 15 million passengers a year.

The $1.6 billion Moynihan Train Hall project will likewise support a bustling transit hub — the busiest one in the country, in fact. An expansion of Pennsylvania Station, the 255,000-square-foot hall will create a boarding concourse for Amtrak and Long Island Rail Road passengers when it opens at the end of 2020.

In addition to working with historic — and sometimes inaccurate — documents and crumbling structures, Skanska has faced another sizable challenge with both projects: The facilities must remain fully operational throughout construction.

“The trains still continue to operate 100% and Amtrak remains in total control of the tracks,” Jacob Raskin, building information modeling (BIM) and virtual design and construction (VDC) specialist at Skanska, explained to Construction Dive. “The airport has zero downtime for the time we’re here.”

Throughout each project’s design and construction, Skanska has relied on reality capture technologies to break down the barriers between the jobsite and project models, and deliver time- and money-saving efficiencies.

At both locations, disrupting operations with traditional surveying methods simply wasn’t an option. The Moynihan Train Hall will occupy only a portion of the functioning post office building, and about 30 active rail tracks run below it. As a result, the crew was only able to access the train tunnels late at night. So once the space was stripped down, Skanska sent in a couple people with a 3D laser scanner.

Using the FARO Focus3D X 330, the team collected millions of measurements within minutes, and scanned the entire jobsite in a few hours. The process, which takes up to 70% less time than sending a traditional field team to take measurements and create drawings, according to the team, also was used at the LaGuardia project, where a survey crew conducted scans just once, at night, without disturbing any airport traffic.

In addition to speed, 3D laser scanning truly excels in accuracy — particularly when conditions are too difficult for traditional measurement methods.

Besides having limited access for surveying, teams at the Moynihan site were working with 110-year-old design documents of the historic postal facility, which is constructed on stilts above train platforms. But this was no obstacle for the 3D laser scanner, which captured existing conditions with measurements that are accurate within 2 millimeters.

“The Moynihan spaces are very complex. We wouldn’t be able to describe them in any other way,” says Val Tzvetkov, Skanska manager of virtual design and construction.

Data produced by the Moynihan scan was, in turn, used to generate a 3D model. When this was overlaid with models that the architects were referencing, the team was able to detect discrepancies in the original plans, such as beams that were never built and columns placed in different locations.

That’s important not only because portions of the existing structure will be reused — the original steel trusses will support a 92-foot-high, barrel-vaulted skylight that spans an acre — but also because variances between planned and as-built reality could lead to unforeseen costs and delays later on.

“Sometimes, a photo is good enough,” Raskin says. “When [the question] is not how high off the ground the pipe is, but is the pipe there at all?”

Given both sites’ limited access, it was critical for the Skanska teams to disseminate the information to others involved in the project — subcontractors, architects, engineers, etc. — who could import the 3D model into software like Navisworks and Revit.

“Laser scanning was instrumental for communicating those conditions out to the wider world,” Raskin said of Moynihan Train Hall.

Getting everyone on the same detailed page from day one not only eliminated the risk for discrepancies between in-house measurements, it also meant the teams could delve into specifics and help other contractors plan ahead. At LaGuardia, a scan of the as-built MEP (mechanical, electrical and plumbing) installations helped the architect refine plans for a baggage kiosk’s carpentry and metal enclosure, for example, and allowed the team to ensure dense mechanical spaces had adequate clearance for conduit.

Recently introduced analysis and comparison software has made it easier for contractors to compare the data collected by reality capture tools to the as-designed model or drawings, creating a vehicle for quality control. And Skanska took full advantage of this capability on both projects. 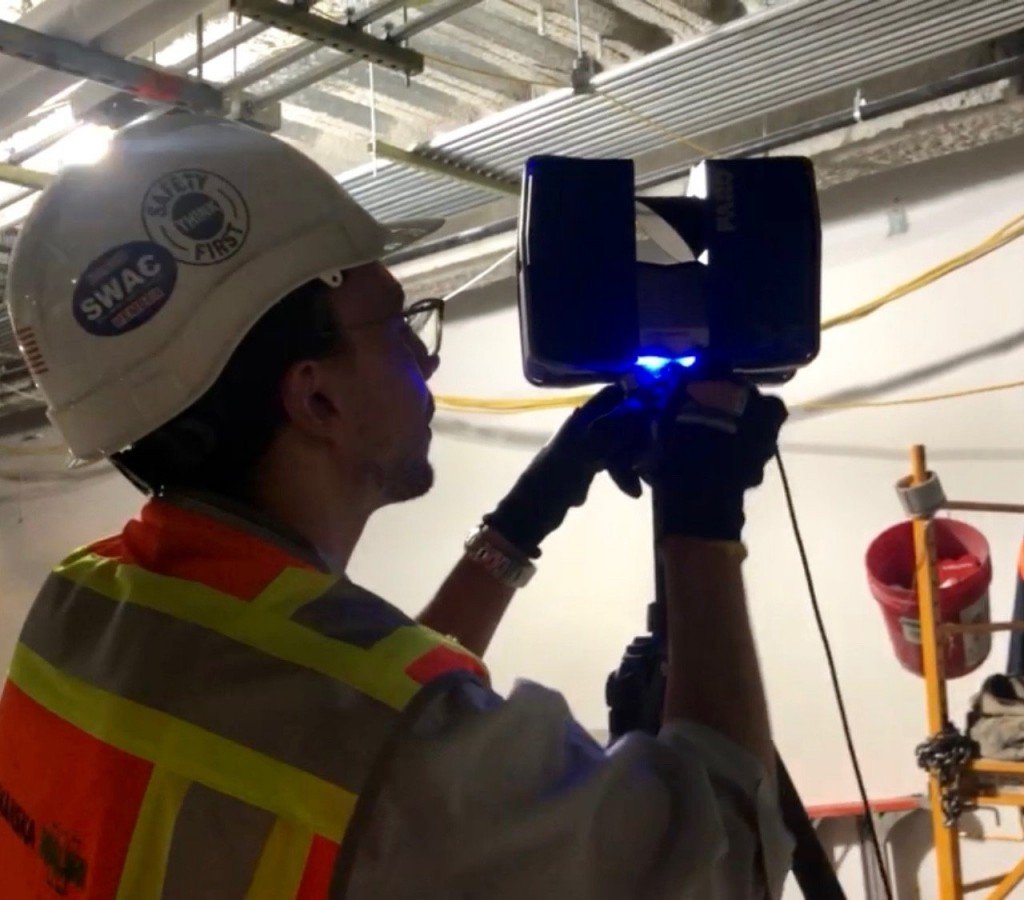 Using programs like StructionSite’s Navisworks Manage plugin, superintendents could identify potential problems by viewing 360-degree photos side by side with images from the 3D models. This early detection can help reduce the cost of rework from the typical 12% to 15% of the cost of construction​ to just 1% to 3%.

Moynihan Train Hall and Terminal B are high-profile, high-stakes projects, with private and public stakeholders at the city, state and federal level.

“With these projects in particular, we have a very large, very diverse group of stakeholders,” said Tony Colonna, senior vice president of innovative construction solutions at Skanska. “With that many people, communication becomes critical.”

“Typically, you walk into a space and take multiple pictures that you have to stitch together,” Colonna says. But, using 360-degree photo technology, “with one click, you capture a 360-degree representation of everything.”

Using cameras like the Insta360 One X, workers at LaGuardia can record video and capture progress during field walks. When combined with a StructionSite platform accessible from any computer, tablet or smartphone, the images create a virtual walk-through — allowing stakeholders, far-flung experts and even superintendents to “see” the conditions and progress firsthand without venturing on-site.

Once construction is complete, 360-degree images and laser scanning can be used for building turnover packages and for double-checking as-built drawings. To turn over one of the first completed buildings at LaGuardia, the team opted for the speed of 360-degree photography. While it would’ve taken weeks to scan and process the 1 million square feet, it took a couple of engineers just two days with 360-degree cameras.

Given these capabilities, reality capture technologies have become an indispensable tool for Skanska teams.

Citing the amount of manhours, time and costs it shaved off the project, as well as “things we haven’t accounted for yet,” Tzvetkov said, “it’s not whether or not you use it; it’s how.”

The Article was published on: constructiondive.com