More than five years after Hudson Yards got its groundbreaking, the megaproject has reached another milestone: According to developers Related Companies and Oxford Properties Group, 15 Hudson Yards, the complex’s first residential building, has topped out.

The building, designed by Diller Scofidio + Renfro in collaboration with Rockwell Group, stands 917 feet tall—not quite hitting supertall status, but large enough to create an imposing presence. It has 285 apartments, four of which are pricey penthouses located at its crown, along with a bevy of over-the-top amenities that include a 75-foot swimming pool, a screening room, and a co-working space that’s essentially a WeWork for the building’s residents. The building also abuts The Shed, the megaproject’s forthcoming cultural space that’s also designed by DS+R and the Rockwell Group.

Those apartments hit the market in the fall of 2016, and as of this writing, more than half of the units have sold; Related CEO Jeff Blau said in a statement that interest “has far exceeded everyone’s expectations.” 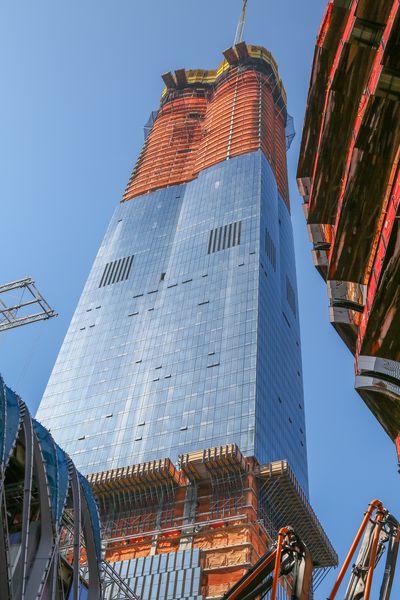 What’s left ranges from a $3.9 million two-bedroom to an aforementioned 88th-floor penthouse, asking $32 million. (The building is also due to have 100 affordable apartments, but details for those have yet to be announced.) According to the developers, residents are expected to move in at the end of 2018.

That’s in keeping with the broader timeline for the megadevelopment; according to the developers, the first phase of Hudson Yards—comprising several buildings, the Shops at Hudson Yards, a public park, and Thomas Heathewick’s Vessel—will open next March, a little more than a year from now. In the past few months alone, the Vessel has topped out, and several of the other skyscrapers are getting close to that point.

As Related and Oxford finish up Phase 1 of the megaproject, the rumormongering about Phase 2 has begun: Earlier this month, sources told the Wall Street Journal that Frank Gehry and Santiago Calatrava will design towers for the west side rail yards portion of the project, which is still a ways off from getting started.

The Article was published on ny.curbed.com